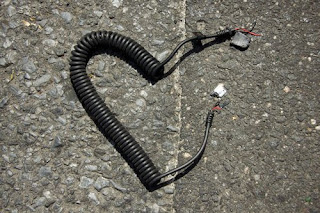 Nobody loves New York City like Christopher Frederick. Where most of us might just glimpse some gunk on the sidewalk or a smear on a window, this Brooklyn-based artist sees hearts--and he immortalizes them in photographs. His recently launched Web site, Urban Love Daily, is a collection of these images, and the clever combination of gritty and sweet is enough to make even the most surly city dweller crack a smile. Besides getting a daily dose of amore, you can also buy a copy of your favorite picture or upload your own heart image on the site. Here's what Chris had to say about the project:

1) Where did the idea for Urban Love Daily originate?

The heart photos began one day when I was walking around Chelsea and saw that someone drew a heart right on the crotch of a man in an underwear add on a bus stop shelter. It made me laugh so hard that I had to take a picture of it. I showed it to a friend who reminded me of a picture I took on the boardwalk of Coney Island years ago, of a Popsicle that was melting into the shape of a heart. Suddenly I started seeing hearts everywhere. Finally I broke out my good camera and began to hunt them down. To my surprise, the more I looked the more I saw. I knew the heart imagery would be too sentimental for the gallery scene, yet I wanted people to see these images because they really struck a chord with me. A blog was the natural solution. I think what compels me to keep taking them is that they are not typically saccharine. I search for hearts that feel smart or tough or raw. 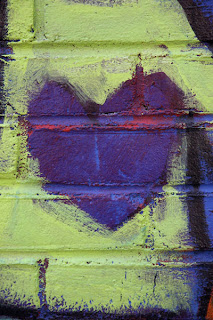 I tend to get most excited when I find hearts formed accidentally, like Electric Heart, where I literally almost stepped on a broken cord laying in the middle of the street before I realized it was strewn in the shape of a heart.

3) What is the coolest submission you've received?

My favorite so far is Beet, an accidental heart formed when a red beet touched a gold beet. I think they were in love. Poor root vegetables getting separated like that. I imagine the joy that filled the photographer when she suddenly saw a distinct blood red heart reveal itself in the midst of the daily task of cooking.

4) What makes NYC the ideal place to find these little expressions of "Urban Love?"

I'm in love with New York City. New York's motto is the famous Milton Glaser rebus I ♥ NY. It's a city of passionate people and tourists that catch the buzz. Because New York is so dense and encourages walking, there's pedestrian traffic everywhere, so there's a lot of opportunity to see the traces of the people who have passed by, from litter and graffiti to self-promotion, decoration, and lost treasures. Within all of that there are lots of hearts to be found. At the same time, the sheer volume of people and activity can be ironically isolating. It can be hard to make deep connections, to find romantic love. I think there's so much heart iconography in this city because we all long for love more than we feel it. It can take a daily reminder not to focus on the darker side and all the irritations that come along with being here, though I have a huge appreciation for the dark side of life. I guess that's why my imagery tends to be gritty and atypical of what one normally associates with a heart. I'm more interested in the complex realities of love than any romantic delusion.

5) So what is it that you love the most about this crazy, beautiful, lonely city?

Anything is possible in New York. If you name it, you can find it. Such abundance has really helped me define myself and choose how I want to see the world.