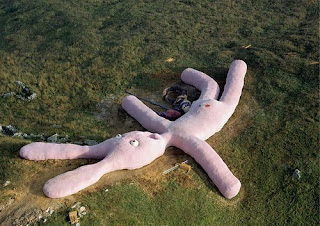 Aerial view of Gelitin's "Rabbit." Image courtesy of Rbeforee, via Flickr.
Finding Five recently Googled and ogled to find the coolest, craziest, most outrageous craft projects on the Web. Many of the wildest creations turned out to be knitted and crocheted and, best of all, some link to patterns! You're welcome--I know you've always wanted a toilet paper scarf.

This ridiculously huge knitting project can be spotted from outer space--for real! Knitted over the course of five years and placed on a Piedmont, Italy mountain as a collaboration between some “giant grandmothers” and the art collective Gelitin, it measures 20 feet high on the sides and comes complete with its knitted “guts” spilling out on one side and a horrified look on its face. People are also allowed to climb around on this bunny (pictures even show people sleeping on it). Want to see it in person? Take your time: The “decaying corpse,” as Gelitin calls it, will be languishing in Piedmont until 2025.

A few years ago, Knitta started "bombing the inner city with vibrant, stitched works of art, wrapped around everything from beer bottles on easy nights to public monuments and utility poles on more ambitious outings." This group, one of my favorite things ever, boasts a membership of “ladies of all ages, nationalities, and… gender.” Now, art collectives all over the country have taken a cue from Knitta and created their own knitted public art, including the JafaGirls’ KnitKnot Tree in Yellow Springs, Ohio that garnered national news coverage.

A combo of crafting and environmental activism, the Hyperbolic Crochet Coral Reef is the brainchild of Christine and Margaret Wertheim, directors of the educational organization Institute for Figuring. The reef—a community project completed by volunteers at workshops around the world—is meant to explore math as well as draw attention to global warming, pollution and endangered sea life. The project stretches thousands of square feet and is currently traveling around the country for exhibited at art galleries and civic centers. It has also spawned “satellite reefs” in the UK, Australia, and Latvia.

Live in a cold area and don’t have a garage? Maybe you should just knit your auto its own sweater. If you own a Volkswagen Bug, there’s a pattern here. New York-based artist Cynthia Ruse also made a cozy out of acrylic yarn, fishing line, and thread for her vehicle as part of the artists’ group COlab’s window display in February. She got a shoutout from the knitting gurus at Lion Brand Yarn.

Don’t have a car to put in cozy? Never mind, you can just knit the whole car. That’s what English art student Lauren Porter did for her final university project. She created a life-size replica of a Ferrari, consisting of 12 miles of yarn stretched over a steel frame. It took Porter 10 months to complete the project, and a London newspaper dubbed the finished product a “Four-Wool Drive.”

Lizette Greco and her two children collaborate to make some bizarre creations they call “sewn art”: The kids sketch out designs, Greco turns them into stuffed animals. One of my favorites is the See-Through Predator, a recycled fabrics and foam wolf with a transparent belly that holds its “prey”— a little girl, a pig, a bird and a bunny. Another of the family’s wacky projects is one they call South Park Quality Meats, stuffed replicas of butchered meats including frankfurters, hams, a leg of lamb, a tongue, tripe, a goat and two pigs heads.

Have you been wanting to talk to your kids about the birds and the bees but can’t find the words? Cozy Coleman’s crochet Childbirth Education Doll is meant to do the talking for you. She comes complete with maternity clothes, a baby (the sex of the baby is a surprise) and a detachable placenta. You can buy the doll at Cozy’s Etsy store or if you’re feeling ambitious, just purchase the pattern and make it yourself. But beware: This anatomically correct doll isn’t for the faint of heart—or the inexperienced crocheter.

Want to look like you’re wearing a roll of toilet paper around your neck? Get the free toilet paper scarf pattern here and you’re in business. The “paper” is a white crocheted strip, while the “roll” is plastic needlepoint canvas with brown yarn.

Jessica Polka sells her crocheted squid, octopus, prawns and other sea creatures inspired by Alertus Seba's 18th-century natural history book Cabinet of Natural Curiosities on Etsy. She also crochets other awesome, nostalgic forms like moustaches and offers several of the patterns on her blog.

The amazing film Coraline might be animated, but the title character’s miniscule sweaters and gloves are real. They’re knit by Indiana-based Althea Crome on impossibly small needles (she makes them herself from stainless steel wire). In addition to Coraline, Crome’s work also has appeared at the Museum of Arts and Design. Her creations are one-twelfth the size of regular garments, or even smaller. Crome calls it “extreme knitting,” (sometimes she goes ultra-tiny for “nano knitting”), and each piece takes months to complete. If you want to buy one, it’ll set you back several hundred dollars or more. Want to try making your own? Crome offers patterns on her Web site.
Posted by Finding Five at 6:03 PM