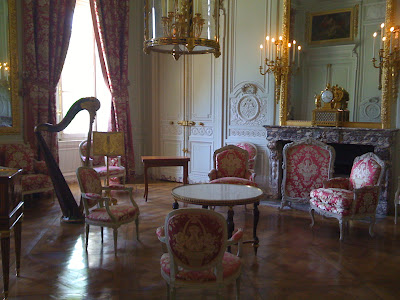 Inside the Domain of Marie Antoinette.
It is difficult to say exactly what Marie Antoinette means to me, but her story is profound: a woman whose fate was the unimaginable fall from utter opulence to unspeakable degradation; a woman who was given very little power, yet was blamed for the ills of an entire nation; a woman whose story is still mulled over, misunderstood, mythologized, and debated hundreds of years later. Add to that Antoinette's connection to the arts--her appreciation for and patronage of everything from theater to painting--and I'm fascinated, breathless. So, when I visited Paris for a couple days a few weeks ago, I couldn't leave without strolling the halls of Versailles and paying tribute at Saint Denis, the queen's final resting place. If you have any interest in Marie Antoinette, these are the places you should seek out in and around La Ville-Lumière:

1) Versailles
If you can choose only one of the places on this list, go to Versailles. Just outside Paris, the huge, lavish former home of Marie Antoinette and Louis XVI offers an intimate look (if your imagination can overcome the crush of tourists) at how French royalty lived in the 1700s. The best things to see are the king and queen's separate, private chambers, the chapel (where Marie Antoinette and Louis XVI were married), the jaw-dropping Hall of Mirrors (restored in 2007), the huge gardens outside the chateau (in the summer, stay to see the huge fountains erupt to classical music) and the Domain of Marie Antoinette (Marie Antoinette's private country residence, a bit of a walk, or a short ride on a rented bicycle, from the chateau). Get a nice look at the some of these sights here.

2) Saint Denis
In a suburb a short Metro ride from the Paris center, Saint Denis is one of the city's best-kept secrets. Mercifully untouristy, the beautiful Basilica, dating back to 475, contains exquisite monuments to French royalty, and the body of almost every French king. Most important to see if you are a Marie Antoinette devotee is the Memorial to King Louis XVI and Queen Marie Antoinette (upstairs), with spectacular sculptures by Edme Gaulle and Pierre Petitot, and both of their graves in the crypt (downstairs). The couple's remains, originally buried unceremoniously in the churchyard of the Madeleine, were not moved to Saint Denis until 1815.

3) Carnavalet
This eye-candy museum with a fabulous garden focuses on Paris history and includes substantial documentation of the French Revolution, as well as some of Marie Antoinette's furniture and other possessions.

4) Tuileries
The palace where Marie Antoinette was forced to live after the royal family was taken from Versailles during the French Revolution no longer stands (it was looted both the French Revolution and burned during the Paris Commune), but the 63-acre Tuileries Garden (by the Louvre) where she used to roam looks much like it did when it opened in the 1660s, despite recent renovations. It was designed by Andre Le Notre, who also created the gardens at Versailles.

5) Conciergerie
This is the saddest stop: the prison (now a museum) where Marie Antoinette was kept during the last days of her life. Today, it's a little kitschy--with hordes of tourists and Marie Antoinette's cell filled with mannequins and sparse furniture meant to reconstruct the scene--but the spot, haunted by its bloody history if not the ghosts of dead inmates, is still worth seeing.