Save The City Reliquary! 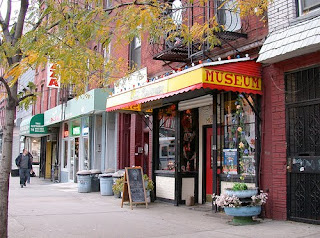 Photo courtesy of E. Bartholomew, via Flickr.
The City Reliquary is one of those places that can make a Brooklynite feel smug about "discovering" one of the sweetest secret hangouts in the borough. Meandering down Metropolitan Avenue a couple years ago, I felt exactly that way when I ducked into this tiny museum and found, behind its yellow and red awning, the coolest, quirkiest, old-timiest collection of NYC ephemera I'd ever seen--everything from a crazy collection of kitschy Statue of Liberty replicas to chunks of long-gone buildings. But later, when I attended my first event at the Reliquary (a reception for the exhibition "76 Kisses " in February, 2008), I found out this hangout wasn't my little secret after all. The place was packed, bursting at the seams with revelers. Turns out that lots of New Yorkers were onto the spot waaay before I marched in, and all its parties, concerts and films draw a big crowd. In warmer weather, people even spill out into the backyard.

While its steady increase in popularity is a good thing, the Reliquary is also experiencing its share of growing pains, according to the museum's president, Dave Herman, who founded the Reliquary as a nonprofit museum--originally a single display window and recorded "tour"(which still exist) at his Williamsburg apartment--and civic organization in 2002. "Our needs are growing larger," Herman says. Among other things, the museum needs to hire an administrator to apply for larger grants and city funding, and if it doesn't raise $60,000 by December, it might have to consider moving out of its current storefront digs at 370 Metropolitan (where it has been since 2006). Although Herman says the Reliquary won't close, its collection might have to seek a home in a public library or other alternative space.

Besides the awesomeness of the Reliquary's permanent collection, rotating exhibitions (past shows have included giant pencils, an impressive display of copper Jell-O molds, and photos and interviews with former Miss Subways), and parties, its mission alone is enough to make anyone want to keep it alive: Connecting visitors to both the past and present of New York. "People have been here [in Williamsburg] for hundreds of years, and I think it's important to acknowledge that," Herman says. "We want to add to the culture and highlight its rich history."

So how can you help? Donate some money or head over to this benefit concert:

What: St. Patrick's Day Benefit Concert for The City Reliquary
When: Wednesday, March 17th 2010, Doors 6:00PM/Show 7:30 PM
Where: Knitting Factory, 361 Metropolitan Ave., Brooklyn
Who: Bands will include: Cecilia Brauer, Drink Me, Brian Dewan, Frankenpine, Lucky Chops and more.
How Much: $20

If you're too broke to do either, just visit and voice your support-- you'll be glad you did!
Posted by Finding Five at 7:36 PM