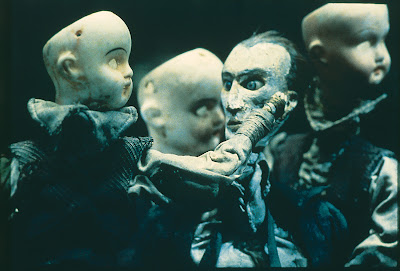 Film still from the Quay Brothers' Street of Crocodiles (1986).

Maybe it's too early to write about this-- but maybe I just wanted an excuse to mention the Quay Brothers. Parsons is mounting "Dormitorium: An Exhibition of Film Decors by the Quay Bros." July 15-Oct. 4, and you should mark your calendar because this will be the first time the tiny, macabre sets from the twins' shatteringly beautiful, spooky stop-animation films have been displayed in North America. The show will also include continuous screenings of some of those works.

"Exploring the design process in relation to how we construct narratives is an important part of a Parsons education, and Dormitorium is an exhibition that goes beyond retrospective to really investigate the nature of creative work," Parsons dean Lydia Matthews said in a press release. "This exhibition gives our students an opportunity to see how the Quay brothers create intricate fantasy worlds, from set design to finished film through their compelling engagement with literature, their command of sound and lighting design, their uncanny use of focus, color and texture, as well as their mastery of digital editing processes."

You don't have to be a student to go: The exhibition will be up at the Sheila C. Johnson Design Center, which is open to the public, and admission is free.

The Quay Brothers-- born in Pennsylvania in 1947 but living in London since the 1970s-- seem to scrape the cobwebs from the darkest corners of our minds, harvesting shreds of Eastern European literature and lore, fairy tales, and childhood nightmares, mixing them up, and pairing them with haunting music and sounds that hang and sparkle in the air. Disassembled dolls, lonely specters, and twisted storybook animals slink silently through enchanted shadow worlds. It's pretty much perfect.

Stephen and Timothy Quay described their films best in an interview with Paris Premiere, caling the works "an alchemy of silences and objects and things inhabited... They're frozen. They're caught in the last breath of Victoriana ... the beauty and sweetness of an epic that suddenly died... "

You have to see the films to appreciate them. Luckily, you don't have to wait until July to at least get a taste: Good excerpts from Street of Crocodiles (their most famous) and Are We Still Married (my personal favorite), are on YouTube, along with that Paris Premiere interview.